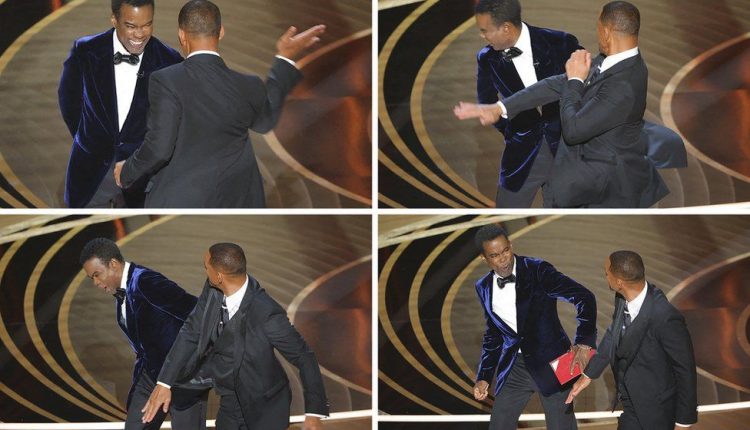 Will Smith slapped Chris Rock in the face on stage at the Oscars after the comic made a joke about the actor’s wife Jada Pinkett Smith.

“Jada, can’t wait for GI Jane 2,” he said, in an apparent reference to her shaved hairdo – which is a result of the hair loss condition alopecia.

Smith walked on stage and struck Rock before returning to his seat and shouting: “Keep my wife’s name out of your [expletive] mouth.”

He later apologised on stage.

The star picked up the first Oscar of his career for playing the father of tennis legends Venus and Serena Williams in King Richard.

“Art imitates life,” he said. “I look like the crazy father, just like they said about Richard Williams. But love will make you do crazy things.”

The Academy of Motion Picture Arts and Sciences, which organises the Oscars, tweeted that it “does not condone violence of any form”.

Rock’s joke referred to 1997 film GI Jane, in which Demi Moore played the title role with a severe buzzcut.

The comedian looked stunned in the immediate aftermath of the incident, but told the audience: “That was the greatest night in the history of television.”

The Los Angeles Police Department later told Variety that Rock had “declined to file a police report” following the event.

After the incident, Rock handed over the best documentary prize, which was the reason he was on stage.

According to The Hollywood Reporter’s Scott Feinberg, a tearful Smith needed to be “pulled aside and comforted” by Denzel Washington and Tyler Perry.

The trio could be seen talking just in front of the stage during an advert break, with Washington and Perry putting their hands on his shoulders. A Star is Born actor Bradley Cooper was also seen standing with Smith and appearing to reassure him.

Presenting the next section, Sean “Diddy” Combs said: “Will and Chris, we’re going to solve that like family. Right now we’re moving on with love.”