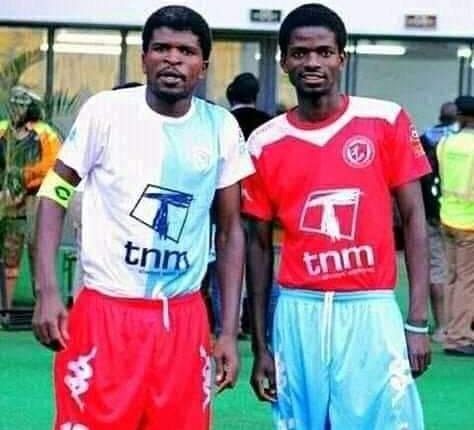 Born and raised in a district largely known for churning out unbridled talent in music, Balaka district, the two Fodya brothers have grown up to scale separately the highest heights of Malawian football and establish themselves as true champions of the game.

In recent times, no pair of brothers in the country can claim to have enjoyed more stellar careers in football than Yamikani and Mark Fodya. While the older of the two, Yamikani, keep racking up trophies at Nyasa Big Bullets, Mark, 7 years his junior, is doing exactly the same at Silver Strikers, steadily gathering silverwares.

Although the two have apparently strived for individuality, their story is embellished much with their likeness. Not only are they indistinguishable in image but in style of play as well. The afroed brothers are all left footed and play both as left wing-backs.

Being the oldest, Yamikani’s career was the first to take off. In 2008, a renowned football scout, Billy Tewesa, had chosen to head to Balaka in search of new unearthed football talent and would be hugely left impressed by the skills Yamikani had shown while  playing as an attacking midfielder for  Young Soccer, a lower-league side in the district.

Without delay, lest other scouts move quickly, Tewesa arranged Yamikani an immediate football trials with the super league giants, Big Bullets. When he left Balaka for Blantyre to try his luck  at Maule, Yamikani was able to convince the People’s Team to secure his signature.

Given the rich talent Yamikani had at this young age, it was no miracle to many and mostly to his elder brother Davie Chancy Fodya who saw the move materialize.

“When Yamikani left for Bullets, I knew he was not coming back. Yami was highly talented by then. Without any difficulties, back then he could play any position on the pitch except playing as a striker and many who had closely watched his game were equally sure that Yamikani would join Bullets permanently.” Said Davie.

Joining Bullets is one thing and playing for Bullets is wholly another thing. Yamikani had joined a group of top players and if he was going to carve his place in the starting eleven, he knew that he had to be ready to take the chances he would be presented with.

In the opening week of the  super league campaign In April 2008 Yamikani   found himself at the bench, surprisingly as a goalkeeper following an injury situation at the club which left late Trust Lunda as the only netminder .

It was in the second week of this 2008 campaign when Yamikani was handed his  debut when Bullets hosted Blue Eagles at the Kamuzu stadium.  Seizing the moment Yamikani put up a resounding 90-minutes-plus performance to announce his arrival at the club.

With his afro neatly combed and his jersey carefully tucked in, deployed as a left wing back, Yamikani had throughout the game shown exceptional kinetic energy and excellent turn of pace to inspire his side a 2-0 victory.

After making a good use of his debut, Yamikani has gone on to become an integral part of the Bullets team. While he proved to be solid in defense, he became a key attacking player on the break thanks to his crossing skills and his expertise with dead balls.

Today his Bullets career has now spanned 14 years, a spell which have seen him score match winning free-kicks, take man of the match awards, win 5 super league titles and other numerous trophies, play in the champions league, become one of the most popular players with the Maule’s fans, and sufficiently represented the Flames.

While Yamikani asserted his place at Bullets and won trophies, the footballing career of his little brother, Mark, 7 years his junior, was beginning to sprout roots and leaves, signaling great potential that he might take the path his sibling was cutting clear.

The football talent in Mark had manifested at a tender age. His eldest brother, Davie Chancy Fodya, coached Mark from 8-14 years old at Maphunziro youth football team in Balaka and describes a young Mark as a prodigy but one who was unwilling to put up enough work rate off the ball.

At the age of 14 Mark left Balaka for Blantyre to start staying with Yamikani who had called for him to come and continue his education studies. Three years later in Blantyre, Mark found himself playing for the two-time champions of Blantyre FMB U-20 football league, Griffin Young Stars. It is here at Griffin where Mark’s physical side of the game greatly improved to make him a true rising star.  With a lot of bright teammates like Peter Banda, Mark, at 17 then, went on to win all the competitions during his second season at Griffin except the FMB league title.

Mark’s performances in Griffin’s cup overhaul had earned him the junior Flames call-up and attracted a number of super league teams like Blantyre United and Azam Tigers who came looking to sign him. Reluctant to rush the little slim Mark into the rollercoaster of the top flight football, coach Griffin Sayenda had blocked any bid from super league teams to sign the youngster. Instead, in 2014 he opted to send Mark to Surestream, the most decorated and robust football academy in the country at that time, believing it was where his development would steadily continue.

After a 2 year stay in the books of Surestream, Mark’s game continued to rise rapidly that into his second season at the academy Silver Strikers could not resist but lure the youngster into their books.

Unknown to the fans of the Central Bankers, Mark would make his first appearance at his new club during Silver’s a preseason friendly in Lilongwe against his elder brother’s side Nyasa Big Bullets. Interestingly, on the first day Mark came against his elder brother, he emerged victorious as Silver won on the day with Clement Luda’s solo goal.  This might have just been a mere friendly but to Mark, he says, will always be his first big moment ever at Silver.

It was a match the Central Bankers’ fans were made aware that they had Mark, a left back equally talented like his big-profiled brother Yamikani. As for Nyasa Big Bullets, after this game, they might have been made to regret for not moving too quickly to sign the bright little brother of their magnificent left back. Mark enjoyed a fine friendly game.

Having shown what he could become at Silver Strikers in that friendly, Mark’s game grew in confidence. On 18th April, Mark played his first ever super league match during Silver’s 2-1 victory over their city rivals, Civo Service United. Ever since that time Mark broke into the Silver’s team of stars. Throughout his stay with the Central Bankers, he has won the Airtel Top 8 two times, the first in 2017 and the second in 2019, and last year he won the inaugural FDH cup.  Interestingly, on the way to most of these triumphs Mark has come against his elder brother. With his composure in front of goal, the young left back has managed to score a number of 10 goals for Silver since he joined in 2016.

Just like his elder brother, Mark has been a nation team player. He has already played for all the junior Flames sides until now he is with the senior team.

Given the age gap between the two Fodya brothers, it might have been conceptually suggested that there would not be any competitive part between the siblings. However, the case has been different as Yamikani and Mark have always kept trying to snatch back titles from each other’s palms. The two Fodyas have truly become superstar champions.

The rise of the two brothers may have come as a surprise to some but their father, Levison Samuel Kotamu Fodya, a former worker at Railways, had a prescient knowledge about it.

Over the phone, responding to my enquiry of the football background the Fodyas have had before Yamikani and Mark individually made it into stardom, the father of the brothers was quick to throw me the old saying, ‘the thread follows the needle.’

The saying is indeed a perfect description for the history of the Fodyas and football, considering that the father is a quintessential football romantic who once played the game too. Strikingly, just like his two sons today, the father played as a left back too. He describes himself as a stalwart in defense who never let the gates open for opponents on the left flanks.

Although he played most of his football in lower leagues at district level, in one of his spells of compelling form he managed to draw interest from Admarc Tigers, a super league thoroughbred back then.

Unfortunately his breakthrough into the super league never happened as he never recovered from a horrible knee injury he suffered while playing for Bereck FC during a local cup final in 1976.

Up to date, Levison Samuel Kotamu Fodya still endures the chronical pain on his left knee and slightly limps in his gait. However, something that has eased that pain, he says, is now seeing his two sons go far in football to fulfill the wish he had in his salad days.

Between Yamikani and Mark, the former has proved to be the one more of his father’s son. The father of the two brothers confesses that it is Yamikani who reminds him the most of his version of younger-self.

“The older one got a lot from me. I always tucked in my shirts, I kept an afro I always combed neatly, and I was a natural humble leader. You see that in Yamikani. I was once a head boy at school, I was a head at church, and I was captain in my soccer teams. You see that in Yamikani. I was never surprised when he earned the nickname ‘Ahedi’. Said Levison Samuel Kotamu Fodya.

Yamikani has won many fans at Bullets not only down to his fine performances but for his unique decent personality he inherited from his father as well.

It’s something special for brothers to play for the same club at the top level but this may seem so unlikely to happen for the Fodya brothers given their apparent lack of wanderlust which has restricted them to playing for the same clubs since making their debut in the Tnm super league.

The two have come against each other a numerous times now while their teams have over the years become the new fiercest rivalry in the annals of Malawian football, beating any other city rivalry at the moment. Already this season, on the 28th May, Bullets have once faced Silver at the Kamuzu stadium and Yamikani, who wasn’t in the squad for Bullets, watched from the stands as his side brushed aside Silver 3-1.

Despite being forced to gnaw at each other by the beautiful game, the two Fodya brothers, linked by blood, remain intricately close. As Mark puts it, “Despite all the rivalry and the success that has come between us my relationship with Yamikani is big. I look up to him as my father, he is always pushing me to get better. He is in Blantyre and I’m here in Lilongwe but we often talk, not only on football but also on a lot of life issues,”.